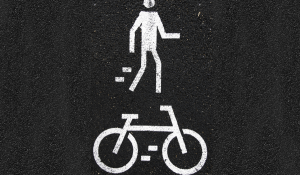 “Of course cyclists should use the road” she said. ” But they must follow the rules of the road. I just saw a cyclist going the wrong way down a one way. ” I gulped a little hard and looked down into my coffee, because I do that. I cycle the “wrong way” down a one-way road. I justify this because I dice with death to go the long way round. I am not an habitual rule breaker. I blush when stopped at a road block and am wracked with guilt until the SARS return is in. How, then, to explain my one-way street aberration?

This identity is not uniquely mine, it is also reflected in the language we use to describe things moving on wheels.
So we will talk about an “accident involving two cars.” With motoring we talk of the vehicle as active. Then we will say “a cyclist got knocked over,” and not “there was a bicycle crash.”  With cycling we talk of the person as active.
The language reflects a sense of the “cycle-plus-cyclist” being more about the human on it, and the “car-plus-driver” being more about the vehicle.
When I go out cycling with my daughter I seek out places where she is treated like the vulnerable child she is. I want both of us to be treated as carefully as wheelchair users should be treated. I want to be safely separate from the car traffic. I want safe places to cross where we are given plenty of time, I want wide margins to allow her to make mistakes. In this case, I want us to be treated as more human than vehicle.
Many “serious” cyclists lobby hard to be treated as car traffic. For them speed and ease of movement is key. These groups call for lanes which enable cyclists to be treated with the same rules as car traffic, but with some additional space and allowances.
The street is a place where we each negotiate for space, time and priority. This negotiation, though, is not equally matched. Motorists are somewhat protected from danger by their surrounding vehicles. By contrast, cyclists are very vulnerable, and so until cyclists can be ensured safety as road traffic, then they should be granted some rights to behave like pedestrians at times.