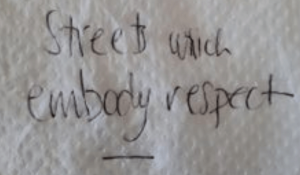 We sat in a formal board-room table overlooking central Cape Town just before Christmas of 2012. We were a small, enthusiastic bunch of street geeks (some of whom went on to set up Open Streets Cape Town) listening intently as each took turns to answer the question: “so, what do you want?” I scribbled a few words on a napkin as the discussion continued and then, offered up that I wanted: “streets which embody respect”. It’s an unusual word – \”embody\” – and it’s a strange concept, but I hold onto it because it captures so much.

We are trained as engineers and planners to think of streets as inert things. In a blunt, material sense this is absolutely true but streets have their own life histories. They were not, as the technical manuals suggest, created from no-where. From a vacuum. All streets, indeed all material things, have different histories. In fact:

“Our streets could have been different”.

And with different streets, then also different urban lives.

As cities exploded and automobility rose in the early decades of the twentieth century, then owning and driving cars was mainly an activity of the elite.  The micro rules of traffic engineering and street design were made to reinforce the priority of this mainly white, male car driving elite over others.

Streets thus embodied a power hierarchy and an elitism.

One problem, perhaps the transport problem of our time, is that physical materials change their embodied power hierarchies, their politics, a lot slower than governments do. It’s easier to write a democratic Constitution than it is to re-orientate the infrastructure of a country along fairer lines. The starting point, though, is an acknowledgement that streets have histories; and that these histories have politics.

For now, our South African streets embody disrespect for those without vehicles.